The best kept secret of Friesland is probably to the area west of Wolvega: a beautiful area that is hardly known to the general public and which has helped to retain its authentic character. Vast peat polders, ditches, canals, rivers, pet-holes (remaining holes after peat mining), swamps, old dikes, locks, pumping stations, mills: lovers of peace and quiet, nature and cultural history can indulge themselves here. Do you enjoy walking? Or more about cycling? Sail? Horse riding? Canoeing? Roller skating? It’s all possible here!

The Grote Veenpolder, that’s how the area southwest of the Helomavaart is known. On the other side of the canal, the landscape consists of a number of smaller peat polders, the names of which in most cases do not bear witness to a great deal of fantasy: Polder De Ontginning, Hoekstra’s Polder, Polder Oldelamer

In the latter polder, next to the Tsjonger, lies nature reserve "Het Braandemeer", which consists of a small lake, grassland plots, swamp, pet-holes, and reed lands. Slightly to the south is another beautiful nature reserve: the Rottige Meenthe. This area covers the eastern half of the Grote Veenpolder which, unlike the western part, has not been dried and cultivated after the peat has been mined. This has also resulted in an alternation of pet-holes, reed beds and marshes and a very special flora and fauna. The area can be explored on foot, by bicycle or by canoe. If you want an expert explanation, we recommend the excursions regularly organized by Staatsbosbeheer.

Art and culture play an important role in the Rottige Meenthe. The area forms, among other things, the backdrop for two annually organized operas: Opera-Nijetrijne and Opera-Spanga. In the latter village, you will also find the studio (to be visited by appointment) with a gallery of ceramic artist and pottery painter Alie Jager and artisanal studio Zink and Silver.

The Grote Veenpolder is also a very interesting area from a cultural-historical point of view. Centuries before the peat extraction, the Scheene was dug here (by monks?), which divided the area between the lower reaches of the Tsjonger and De Linde. This border ditch was later widened for peat transport. Today, De Scheene forms an idyllic, seemingly natural, landscape element. Where the Scheene flows into the Helomavaart is the Scheenesluis. Close to it are two of the many water mills that drained the area of ​​the Grote Veenpolder.

The aforementioned Helomavaart connects De Tsjonger and De Linde with each other and was constructed in 1748 to be able to remove the peat by ship. The canal is named after the Van Heloma family, who in 1704 came into possession of the "Weststellingwerfsche patented Peat Company". In 1927, the Threeway-lock was built at the place where the canal in the Lende came. This lock, which is unique in the Netherlands, was necessary because of the water management necessity to realize three different water levels in the Helomavaart, the upper course of De Lende and the lower course. The complex was restored to its original state in 1994.

The Lende and the Tsjonger come together at Slijkenburg. Nothing can be recognized about the origin of this village as a defense ramp against the Spaniards in the Eighty Years’ War. Here the old dikes only remind us of the time that the village was still on the coast of the Zuiderzee. Along the village runs the N351, which is named after Peter Stuyvesant, the director general of the former Dutch colony Nieuw Nederland, of which Nieuw Amsterdam (nowadays New York) was the capital. At Scherpenzeel, the village where he grew up, there is a monument on the N351 in honor of this important historical figure. A statue of him is placed at the Tjerk Hiddesweg in Wolvega. That place is worth a visit, among other things because of Museum Het Kiekhuus and the Oudheidkamer located in the Windlust mill. Even more information about local history is provided by the Historical Information Point located in the Public Library. And if you are there, take a look at the Kijkzaal, where changing art exhibitions are held. 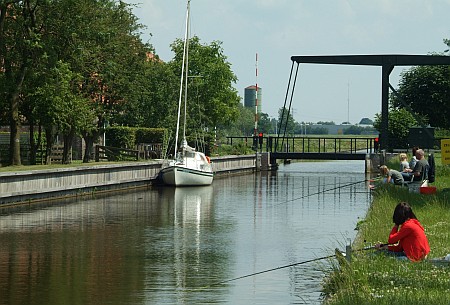