Long ago the sea penetrated far into the North Frisian countryside via the Lauwers. Nowadays, only one river remains from that inlet of the sea, which forms part of the border between Friesland and Groningen. Monks from Gerkesklooster laid a dike in the estuary of the Lauwers in the fifteenth century. The village of Munnekezijl (munneke = monks; zijl = sluice) was created at the drainage sluice in that dike, which was relocated and renewed several times over the centuries. Also on the ’Groninger side’ of the Lauwers are two villages that take their name from the presence of a lock: Lauwerzijl and Pieterzijl. Like Visvliet, the latter village belonged to Friesland until 1637.

The area around the Lauwers has a beautiful, varied landscape, which is ideal for cycling, walking and / or sailing. North of the Prinses Margrietkanaal there is a typical sea clay landscape: beautiful views, old dikes, winding waters, and scattered villages with, without doubt, always a church tower in the center and often a windmill. A ground station for satellite communication was realized near Burum in the 60s of the last century, popularly called ’It grutte ear’ (the big ear). The location was chosen due to the fact that the reception and transmission of radio signals in this open and empty landscape are not or hardly disturbed. Talking about rest ...

Just south of Burum the Galilee women’s monastery used to be, which belonged to the monastery in Gerkesklooster. That village takes its name from the founder of the monastery, a certain Gerke Harkema from Augustinusga. The church, nowadays a bit distant from the village, originated from a renovation of the brewery of the monastery. Over the centuries, the village has merged with Stroobos, which until 1993 belonged to the province of Groningen. The twin village is dominated by the Barkmeijer shipyard, which was established at the then Kolonelsdiep in 1850.

In Stroobos you can cross the canal via a bridge. There, across the water, lie the Surhuizumer Mieden. These ’mieden’, which also occur south of Buitenpost, form a very specific landscape on the transition of clay, sand, and peat. Whoever explores these marshy areas on foot or by bike will see a very interesting cultural-historical landscape (strip-shaped peat subdivision, pet-holes (remaining waters from peat mining), alder lanes, wooded banks) with a great deal of natural richness (meadows, marshes, meadow birds).
The part of the Lauwers to the south of the Prinses Margrietkanaal is not navigable but, in fact, only recognizable as a winding ’floor’ in the landscape, which forms the provincial border as far as Surhuisterveen. 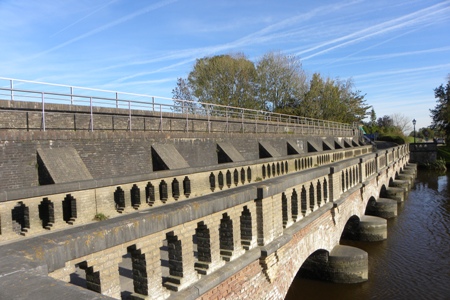