Heerenveen enjoys international fame for iceskating. Thialf was the second covered 400 meter track in the world and is still considered one of the fastest ice rinks in the world. In addition, Heerenveen is of course known for the football club of the same name and the stadium named after the legendary football player Abe Lenstra. But this ’sports city’ and its surroundings have a lot more to offer!

Heerenveen was originally a peat colonial settlement. In 1551, the notables Van Dekema, Van Cuijk, and Foeyts, the ’gentlemen of the peat’, founded the Schoterlandse Veencompagnie, the oldest Dutch high peat colony and the second oldest public limited company in the Netherlands.

They started digging the Heerensloot, along which the peat would be removed. Right after that, the Schoterlandse Compagnonsvaart was dug in an easterly direction, the endpoint of which, with the extraction of the peat, continued to shift. Heerenveen originated at the intersection of these peat canals. These on their turn became the definitive boundaries of the existing "grietenijen" (municipalities). Until a larger municipality came into being in 1934 with the name ’Heerenveen’, which consisted of the formal municipalities of Schoterland, Aengwirden, and part of Haskerland, Heerenveen lay for centuries in three different municipalities.

The past and present of Heerenveen and its surroundings are told and depicted in a fascinating way in Museum Willem van Haren. A separate part of it is entirely devoted to the minister, freethinker, socialist, anarchist and anti-militarist Ferdinand Domela Nieuwenhuis, who has made a special effort to improve the miserable living and working conditions of peat workers in the area.

The living conditions contrasted sharply with those of the notables who settled in the course of the centuries in the area that has since been reclaimed southeast of Heerenveen. In 1676 the Frisian governor Willem Frederik and his wife, Albertine Agnes van Oranje, had an estate constructed here. They were followed by numerous other notables who built country houses and park-like gardens in the area. This has resulted in a very special concentration of country estates with associated service homes and farms, age-old forests, stately lanes and beautiful parks. The whole forms the present-day estate Oranjewoud, an area of ​​400 hectares that is managed by Staatsbosbeheer. The nickname ’Pronkzaal van Friesland’ (Showroom of Friesland) actually says it all.

Part of the estate was designed by Daniël Marot, who also designed the gardens of the Royal palace Het Loo. That part was reconstructed in 2004 in its original, baroque style. The area was also expanded with a new garden, in which the newly built, sleekly designed building of Museum Belvédère (museum of modern Frisian art; highly recommended!) Is beautifully integrated. Oranjewoud Estate is best explored on foot. A walking route of no less than 19 kilometers has been set out by Staatsbosbeheer.

The wider area forms a beautiful, very varied backdrop for cycling trips. To the north of the forest area are the architecturally and urban developmentally interesting residential area of ​​Skoatterwâld and the aforementioned Museum Belvédère. In a southerly direction, the forest area abruptly changes into the open landscape that is formed by grassland on either side of the river Tjonger. Towards the east, there is a gradual transition to a semi-open landscape.

The Frisian Haagje, as Heerenveen and the surrounding area are also called, (with a nod to sophisticated The Hague) has everything to offer for a pleasant stay. The liveliness of the sports and shopping town of Heerenveen, the tranquility, nature and cultural history of Oranjewoud, the culture, architecture and urban design of Museum Belvédère and Skoatterwâld and the very varied landscape of the wider surroundings. 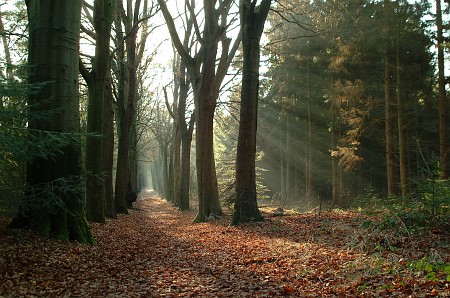