Most Elfstedentocht ice skaters will not be aware that the first part of the journey, from Leeuwarden to Sneek, will ride through an area that was still around sea around the year 1200: the Middelsee. That was a sea inlet from the Wadden Sea deep into the land, which ran west past Leeuwarden, bent off from Raerd to the west and only ended at Bolsward. At Raerd the river De Boorne ended in the Middelsee. Just north of that village is the very special Park Jongemastate, also known as the Raerder woods.

The Middelsee divided Friesland into Westergo and Oostergo. When the sea arm began to silt up, it was gradually being reclaimed into polders from the south from the middle of the eleventh century. The polders were named after the villages that were on the banks of the (former) sea arm: Weidumer Nieuwland, Mantgumer Nieuwland, Wytgaarder Nieuwland, etcetera. The buildings in the ’new lands’ are still limited to scattered farms to this day. As a result, the area has enormous openness and beautiful views: for many Fryslân at its best.

The border between the ’new land’ and the ’old land’ is clearly recognizable in the landscape by the slightly higher, winding roads over the dikes and levies along the former Middelsee. Between Easterwierrum and Boazum, it had sort of a ’bottleneck’: the two banks were less than a kilometer apart. The dike between the two villages is the beginning (or the end) of the famous, more than 42 km long Slachtedyk, which in 2000 formed the first edition and atmospheric backdrop for the Slachtemarathon. This has since been organized once every four years. But you don’t have to wait until the next edition: the dike is freely accessible. And when you set off on your own, you experience the beautiful landscape, the peace, and quiet all the more! And of course, you may also walk a small part of the route...

The Zwette runs right between the banks of the former Middelsee, which for a long time was the most important connection between Leeuwarden and Sneek. Several villages on the banks of the former sea arm were connected to the Zwette via narrow canals. Today, the Zwette is part of the Middelsee route. The boating route, which opened in 2005, makes the area between Leeuwarden, Sneek, Bolsward and Franeker accessible to water sports enthusiasts.

A number of the villages on the banks of the former Middelsee can be reached by boat. Boazum, located on the Boazumer Feart, is an attractive, picturesque village with an authentic village café. Easterwierrum, known for the annual Berne-iepenloftspul, (Childrens open air theatre) is close to the Zwette. Mooring places have been built near the village, just like at Dearsum. That village used to be famous for cattle breeding. The farm of the internationally renowned cattle breeder Durk Schaap, who was visited by Queen Wilhelmina and Prince Hendrik in 1913, now has found new purpose as a luxury recreational home and mini-campsite.

Mantgum is a little further away from the Zwette, but can be reached via the Mantgumer Feart and has its own small harbor. When you take a walk through the picturesque center of the village, it will not surprise you that it has the status of a protected village. Equally beautiful is the "Seerp van Galamawei", the road to the station along the Leeuwarden-Sneek railway line which opened in 1883. Opposite Mantgum, on the other side of the former Middelsee, is Reduzum, which is also accessible from the Zwette for small rental boats and has a marina with 30 berths. On www.reduzum.com you can read that it has always been a progressive village.

But if you are not a watersports enthusiast, this area still has a lot to offer. The quiet country roads, for example, are ideal for cycling. In this way, the other villages are also within reach. For example, take a look at Jellum, which is known for its annual pumpkin festival on the third weekend of September. The nearby Bears is worth a visit because of the "Bezoekerscentrum Uniastate" (Uniastate Visitor Center). The original gate of that estate has been preserved and the earlier contours are represented by means of a steel frame.

Finally, Weidum is highly recommended: a picturesque, somewhat elegant village with a unique, beautiful open space in the middle. The western part of it, at the foot of the mound (with one of the most beautiful churches in Friesland), the field is used for the local local Frisian sport of Kaatsen. 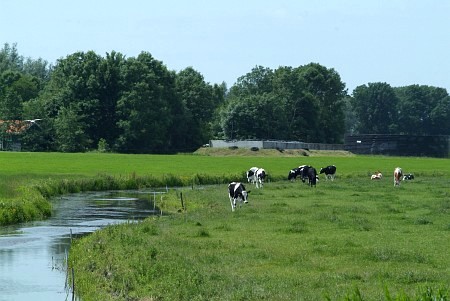