Beesterzwaag became nationally known when the press discovered that the Lauswolt estate was the "secret" location for the discussions that eventually led to the Balkenende IV cabinet. The choice of the political leaders for this environment is not surprising: far away from all hectic, leafy and with the necessary grandeur. It is not for nothing that Beetsterzwaag is also known to the insiders as "the Wassenaar of the North"
Traditionally, the surroundings of Beetsterzwaag were already popular with the nobility and patriciate, who realized their estates with country houses there. At the beginning of the nineteenth century, large landowners started to plant forests on a large scale. Since then, the village itself has also developed into a place of residence that to this day is associated with "chic" and "decent".
The forest area around Beetsterzwaag is a gem from a landscape point of view: coniferous and deciduous forest alternate and are interrupted by pieces of grassland, heathland, and water. In addition to the Lauswolt estate, which also has a golf course, there is also the beautiful Park-Olterterp parked in the landscape style. In the mansion of the same name, which was built in 1907 to replace an older castle, it is the seat of It Fryske Gea, the provincial association for nature protection.
Along the Boorne (also known as Oud- or Koningsdiep), a drainage stream from the Drents Plateau, there is a wide, open strip that cuts through the area from east to west. To the south, the forest area continues and there is also the Liphústerheide, a vast heathland of 6 hectares. Even further south the forest area becomes the semi-open landscape around Hemrik and Lippenhuizen. Here the peat mining history of the area is still clearly recognizable in the tight, elongated subdivision.

The latter also applies to the western part of the region, between Gorredijk and the Wijde Ee (west of Drachten). Here there is a varied landscape that consists of vast peat bogs, small pieces of forest and water. The Boorne continues its way here, and the Nieuwe Vaart and the Polderhoofdkanaal, both dug for drainage and drainage of peat. The perfectly straight Polderhoofdkanaal, which makes a right angle at Nij Beets towards the Nieuwe Vaart, dates from 1875 and was closed to shipping in 1967. In the meantime it has been reopened for recreational sailing. This creates an extra link between the Turfroute, of which the Nieuwe Vaart is a part, and the Frisian Lake District. The museum It Damshûs in Nij Beets offers a beautiful picture of the history and consequences of the peat mining industry in the area.

Last but not least, the Wijnjeterper Schar, a nature area to the east of the Beetsterzwaag forests that consists of forests, ponds, heathland, and rugged grassland. A three-kilometer ’poetry route’ runs through this area: a walk along fifteen panels with poems by different poets, in Frisian, Dutch and Stellingwerfs, the regional language spoken in Southeast Friesland. The poems can also be read with an mp3 player, read by the poet himself. The audio files and texts are on the website of Staatsbosbeheer-MP3 and can be downloaded.

It will be clear: the wide surroundings of Beetsterzwaag are in all respects a very attractive area. Nature, tranquility, landscape beauty, culture, and cultural history, sporting opportunities: this region has a lot to offer. The in itself varied forests are ideal for hiking, horse riding or mountain biking. And for those who want to discover the enormous diversity of the entire region, the bicycle is a great means of transport. Finally, this can also be combined with a boat trip through the area. 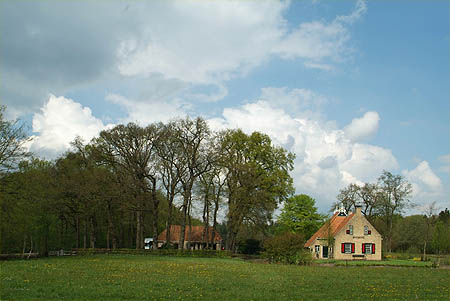