For most, the Afsluitdijk is no more and no less than a convenient, fast connection between Friesland and North Holland. Only a few realize that the dike, constructed between 1927 and 1932, is one of the world’s largest water management projects ever. The realization of a 30-kilometer dam to close off an inland sea was an unprecedented achievement, certainly at that time.

The Afsluitdijk is not only a connection between destinations; the dike itself is also an attractive destination. Here you will experience the superlative of the concept of grandeur. When the weather is nice, the view of the Wadden Sea and the IJsselmeer is breathtaking. And in bad weather, you are really one with the elements here.

Kornwerderzand is, just like Breezanddijk, a former work island. The German advance was held back here in May 1940 for a long time. The so-called ’casemates’ (bunkers) still exist and today form an interesting Casemate Museum. There is also a large lock complex here. The complex is a national monument and is named after Hendrik Lorentz, who received the Nobel Prize for physics in 1902 and played an important role in the construction of the Afsluitdijk.

The area around the connection of the Afsluitdijk to the mainland is also worthwhile. Cornwerd, the birthplace of the poet Obe Postma, is a protected townscape and in Wons is a very rare "central building church". Zurich is better known for its hotel-café-restaurant, named after the nearby monument "De Steenen Man", where many dyke workers sought entertainment and where it allegedly could go wild. 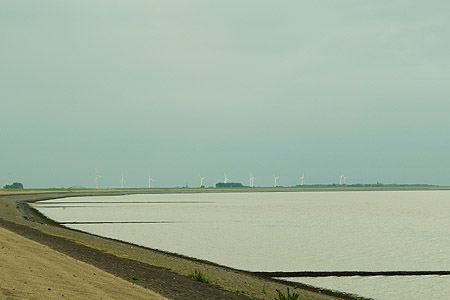