between Leeuwarden and Drachten lies a very special part of Friesland. Here the "Friese Wouden" (Frisian Woodlands) merge into the "Lage Midden" (Lower center), the low-lying part of the province where the Frisian Lakes are located. This transition provides a wonderful combination of diverse landscapes: the semi-open landscape of the Woodlands, a wide and open peat meadow landscape, reclaimed lakes, here and there a single mound, swamp and reed lands, and water, lots of water. The latter naturally makes the area particularly attractive for water sports enthusiasts. But this beautiful area also has a lot to offer for the landlubber.

The area is intersected by two important connections for commercial shipping: the Princess Margriet Kanaal and its branch towards Leeuwarden and Harlingen, the Van Harinxma Kanaal. Both were realized between 1949 and 1952. In addition, existing waterways were deepened and channeled. The place where the Princess Margriet Canal crosses the route that used to be busy between Leeuwarden and Drachten is called ’Krúswetters’ (Crosswaters). South of it lies National Park De Alde Feanen, a 4000-hectare area consisting of open water, vast reed fields, flowery grasslands, and swamp forests. A large part is managed by It Fryske Gea. Traditionally the area is also called "De Princenhof", due to the fact that it formerly was used by the House of Orange as a hunting grounds. It was discovered as a recreational area as early as the beginning of the twentieth century and now offers the visitor countless options: boating, sailing, walking, nature excursions, cruises.

Earnewâld is inextricably linked to the past and present of De Alde Feanen. After the peat diggers had given the landscape a completely different look, it became a village of fishermen, skippers and reed cutters. Nowadays Earnewâld is a recreational and water sports village and the beating touristic heart of the National Park. In addition to the National Park visitor center, the stork station It Eibertshiem, Museum Het Kokelhûs and the Skûtsjemuseum are also worth a visit. Galerie Koopmans is highly recommended for art lovers
But the region has more to offer than only Earnewâld and the Alde Feanen! For example, cross the Prinses Margriet Kanaal to Warten. This typical waterfront village on the old shipping route from Leeuwarden to Drachten did not gain access to land until 1865. In the village, you can find the only remaining "langhuisboerderij" (longhouse farm) of Friesland that, just like the former local "armenhuis" (house for the poor), now has a museum function.

A little further to the west lies Wergea, which originated on a mound between three lakes that were drained in the seventeenth and eighteenth centuries. The village grew considerably thanks to its location on the formerly busy freight route from Leeuwarden, via Grou to Sneek. The inhabitants were known as the "Brêgebidlers" (bridge beggars), because of the toll that the skippers had to pay when they crossed the bridge in the village. In 1886 the first cooperative dairy factory in the Netherlands was established in Wergea, which has grown into the current international dairy group Friesland Foods. The beautiful village also forms the backdrop for the famous book by Nynke van Hichtum, "Afkes Tiental". The old castle mansion that is playing a role in. Until 2019 it used to house the "Museum Ald Slot". You can download a walking route and two cycling routes via www.wergea.com.

Oudega (SM) is located east of the Alde Feanen. Via the "Oudegaster Zanding", a small lake that was drained in 1922, this village used to be connected to the "Wijde Ee" waterway. Across the water lies the hamlet of "Smalle Ee", which used to be an important trading place. Nowadays it the neighboring "De Veenhoop" has the activity, which is mainly focused on water sports. Close to the day on which the famous Skûtsjesilen competition is held here, the multi-day and somewhat notorious "Veenhoopfestival" takes place close to the village.

The "Healânspad" is a beautiful cycling route through the transition area between the "Friese Wouden" and the "lage Midden". The route takes you past Garyp, among others. This village has always had a strong bond with Suwâld, located across the Prinses Margriet canal. Already in 1645 there was a "transfer", which was restored to its former glory in 1995 with the commissioning of a small (bicycle) ferry that runs on solar energy. South of Suwâld is still the old ferry house from 1727. 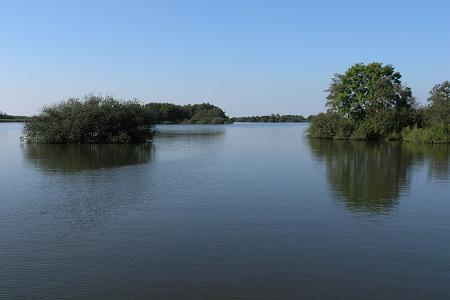