The area around the Fluessen is first and foremost characterized by its enormous openness: a large, elongated lake lies amidst vast, low-lying farmlands with here and there a sand ridge that creates a slope in the landscape. Due to its size and depth, the Fluessen is particularly popular with sailors. But the area is not only a mecca for water sports enthusiasts; also onshore it has a lot to offer, especially for those who love peace and nature.

Thousands of years ago, during the second-to-last ice age, a sliding trough was dragged by the sliding land ice. That glacier valley later filled with water and that is how Heegermeer and the Fluessen came into being. Because the ice mass had pushed the ground ahead, dams were formed that nowadays protrude like sand ridges above the rest of the landscape. Hemelum is located on such a sand ridge. Since the middle of the thirteenth century, there was a women’s monastery here that made way for a men’s monastery one and a half centuries later. That too has long since disappeared. But in 2001, another monastery settled in the village: the Russian Orthodox monastery of Saint Nicholas of Myra. The location of Hemelum on the Morra and close to the forests of Gaasterland makes it an excellent base for boating, cycling or walking tours. For example, take a look at "Route Zuidwest Fryslân".

Koudum also originated on a higher sand ridge. A number of distinguished families used to live in the village. One of them was the Galama family, which worked for the extraction of low-lying land. As a reward for this, in 1628 the Galamas received the right from the Frisian States to levy tolls on the narrow passage between the Fluessen and the Morra. When the Koudumer Slaperdijk was constructed between Hindeloopen and Hemelum in 1732, a lock was built at the ’Galama dams’. The toll was only bought off in 1942 by the then municipality of Hemelumer Oldeferd. Since the aqueduct was put into use in 2007, the delays for shipping and road traffic are a thing of the past.

Because of the horticulture that developed at Koudum, the inhabitants were nicknamed ’Koudumer Beantsjes’ (beans). Since 2005, the Koudumer Beantsjedei has been held annually in honor of the picking of the first beans (end of June). Two years later, that party was combined for the first time with a nostalgic race for sailing barges from Koudum to Gaastmeer and back. The number of galleries and studios in the village is striking: Singel 19, Beeldhouwcentrum Koudum, Galerie Hekker, Wigle Engelsma en Hanshan Roebers.
For centuries the lower areas were partly underwater for much of the year. This applied, for example, to the area northwest of the Fluessen. Here lie hamlets with names such as It Heidenskip and De Hel, which refer to the previously poor natural conditions. Drying the land meant a major improvement. The name ’Polder De Vooruitgang’ (Polder The Progress) is significant in that regard. Nowadays it is a beautiful, wide-open area with beautiful views and impressive cloud formations.

The milling of the polders is still partly done with windmills. A characteristic type is the so-called American Wind Engine, which is characterized by a light, iron construction, a wind wheel with iron blades and one or two iron wind vanes. Between Koudum and Molkwerum is one of the largest examples of Friesland.

The Noordwolde-region is located on the southeast side of the lake. After the dikes of the Grote Noordwolder Veenpolder in 1835 peat was extracted here. Along the road through the villages located here are several monumental farms, with in many cases a milk cellar under the house, where cheese and butter used to be made. Home production largely disappeared when a dairy factory was built in 1910 in Elahuizen. Nowadays the factory houses a group accommodation. The village also has two sailing schools.

Oudega also previously had its own port on the Fluessen. The lock in the Grote Turfvaart, the connection between the lake and the village, still exists. In Kolderwolde there are a number of images of women along the road, the Famkes van Kolderwolde (The Girls of Kolderwolde). 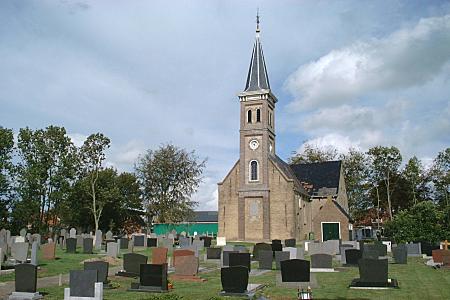