Village of 'Manke Meine' and 'Kromme Knilles'Akkrum is a lively and lovely water sports village. With unique shops and cosy restaurants and cafes. The village is located at the beginning of a route called 'Turfroute'; a magnificent start of a beautiful sailing route.

The building of ‘Coopersbrug’When you walk through the village of Akkrum, you immediately see the building of Coopersbrug. A wonderful building called after mr. F.H. Kuipers. In 1866 he emigrated to America and became a rich businessman. During the yearly visit to his father, he saw the poverty of the elderly people living in the village. He raised a foundation and build the Coopersbrug to support the poor people with housing and provision. The house has a magnificent garden with a carp pond and a sundial.

Single ladiesA building called ‘Welgelegen’ is worth a visit as well. The tea cupola is an eye-catching monument from the 18th century. It is build by Augustinus Lycklema á Nijeholt. In 1924 the former owner passed away and left behind her heritage to the foundation of ‘Welgelegen’. With that money a house was build to provide a home to ‘solitary well-mannered women from the middle classes born out of Frisian parents’.

‘Manke Meine’ and ‘Kromme Knilles’There is an old story about the existence of the name of the village of Akkrum. Around approximately 1400 two giants named ‘Manke Meine’ and ‘Kromme Knilles’ dug a ditch. During their work ‘Knilles’ discoveres a huge curve in the canal. “Ach, Krom!”, he said to Meine. This can be translated as ‘curve’. The farmers heard it and thought this would be a nice name for their village. But the giants got stuck within a conflict. ‘Manke Meine’ dug the ditch straight to the west. This way, the river 'Meinesloot' arised. ‘Knilles’ dug to the east. In his anger he didn't look back and dug the curved 'Kromme Knilles'. A sculpture of the two giants keeps the legend alive.

TipsAkkrum is known for its organisation of sportsmanship, touristy and cultural activities.

• Every year, Akkrum is the stage of two special championships. You can enjoy the Frisian Championship ‘Slingeraap’ on which the main activity is swaying on a rope. The comments are given by the well known lawyer duo Wim and Hans Anker.

• In Akkrum you find the Frisian Championship ‘Mastklimmen’ as well, which can be translated as ‘pole climbing’. Besides, the village is the place of birth of the famous soccer trainer of the national junior soccer team, Foppe de Haan! 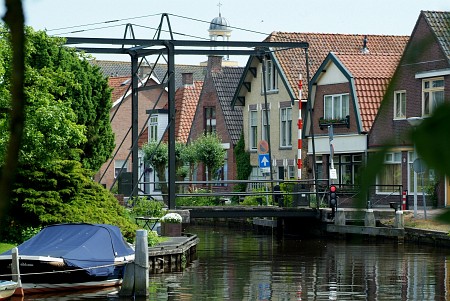