Lovers of cultural history and traditional art can indulge in the beautiful coastal area between Makkum and Hindeloopen. The area is the birthplace of the famous Makkum pottery, the renowned Hindelooper painting, and the less well-known, but also very characteristic Workum pottery. Two of the Frisian Eleven Cities are located here: Workum and Hindeloopen. And anyone who has visited Makkum will agree that there should have been twelve Frisian cities.

But this area has much more to offer: a beautiful wide landscape, picturesque villages, tranquility, space, and varied nature. You can really enjoy cycling, walking, rollerblading or horse riding here. And the IJsselmeer offers limitless opportunities for sailing, sailing, (kite) surfing, water skiing, swimming or fishing.

Makkum was originally a fishing village, where some industrial activity later arose: shipyards, sawmills, brick factories, and lime kilns. In recent decades it has become a busy and bustling village that mainly lives off tourism. Part of the Makkumerwaard, a reclaimed part of the IJsselmeer, has been transformed into a recreational area with a campsite, a holiday park, a sandy beach, a marina and a boulevard with shops. To the north and south of it are the Makkumerwaarden, an attractive nature reserve.

The old village has retained its authentic and attractive character. Makkum has an urban appearance because of continuous facades, which mainly consists of distinguished houses, townhouses, and former warehouses. At the Turfmarkt, two eighteenth-century buildings with a modern extension contain the world-famous pottery company Koninklijke Tichelaar, where you can get a tour (by appointment). Art lovers can also visit Galerie Käller, Atelier In Beeld or Aart Cornelissen’s studio. Would you rather go shopping? Makkum has an array of authentic shops and boutiques and in between and afterward there are several cozy terraces, cafes, and restaurants to discuss the shopping results.

The area of ​​the Aldfaers Erf Route lies between Makkum and Workum. This route, which is over 20 kilometers long, connects a number of picturesque villages, runs through vast meadows, along the IJsselmeer dike and combines cultural history, landscape, and nature. The Makkumer Súdmar, a peat polder that was drained at the end of the nineteenth century, lies between the museum village of Allingawier and Idsegahuizum. South of Piaam the route runs directly behind the dike and along the Dyksfearten. Gaast, it’s already in the name, is a bit higher on a sandy mound. The lovely, beautiful location directly behind the dike in no way suggests that rough people used to live here: poachers, hunters, sailors, and whalers. Here you have a truly breathtaking view of the IJsselmeer, the Makkumerwaarden and the Workumerwaard from the dike.

The Workumerwaard was diked after the closure of the Zuiderzee (1932). From the road over the old Zuiderzeedijk (dike), you have a beautiful view of the old and new land. Southwest of Workum is Workumer Nieuwland, which was reclaimed more than 300 years earlier. The road from Workum to Hindeloopen is also located here on the original Zuiderzeedijk.

Workum and Hindeloopen themselves hardly need any introduction. For a description of the atmosphere and character: click on one of the two links. Workum naturally owes its fame to the Jopie Huisman Museum. But Museum Warkums Erfskip is also worth a visit. Furthermore, this pleasant town has a considerable number of galleries, studios, and potteries. You can find them on site www.workum.nl, which we heartily recommend if you want to know more about Workum.

Hindeloopen is famous for its characteristic painting style. You can see examples of this in various shops and studios and in the Hidde Nijland Museum. In the picturesque town, you will also find the unique "Eerste Friese Schaatsmuseum" (First Frisian Ice Skating Museum). Is the weather suitable for a visit to the beach? You will find that on the south side of the town. Then be aware of the fact that you are part of a long tradition, for the special bathing pavilion, built-in 1913, bears witness to the long history of Hindeloopen as a seaside resort. 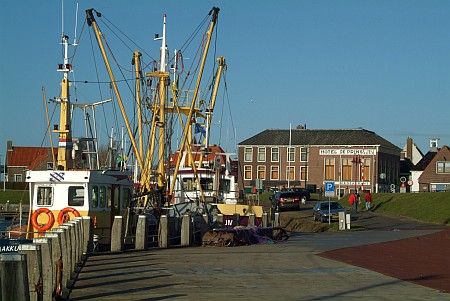