Rottum, Rotsterhaule, Rotstergaast, Rohel. They are not the most inviting names. Nevertheless, the area between Heerenveen and Lake Tjeukemeer is more than worth a visit. The vastness of the landscape is breathtaking, the silence is audible and the tranquility is unprecedented.

The area consists of low-lying peat lands with sand popping up here and there. The exits -haule and -gaast indicate those higher-lying grounds. The habitation history can be seen from the place names: from Rottum (presumably named after a nobleman, Tjalling Rotmers), Rotsterhaule and Rotstergaast arose, from Oldeouwer (’old bank’) Ouwster Nijegea and Ouwsterhaule and from Oudehaske Nijehaske and Haskerhorne. Originally ’Haske’ would refer to a specific type of grass species, but it is also Frisian for ’haasje’ (Hare), the animal that adorned the flag of the former municipality of Haskerland.

Nature lovers can indulge in the Oosterschar, a more than 500-hectare nature reserve between Sint Johannesga and the Tsjonger river. It consists of open water, reed lands, grassland, and swampwoods and was created by the excavation of peat in the second half of the nineteenth century.

The picturesque Nannewiid near Oudehaske is also the result of peat extraction. It is a paradise for (small) water sports, fishermen and swimmers. Of course, the Tjeukemeer also offers many more opportunities for water-related recreation. 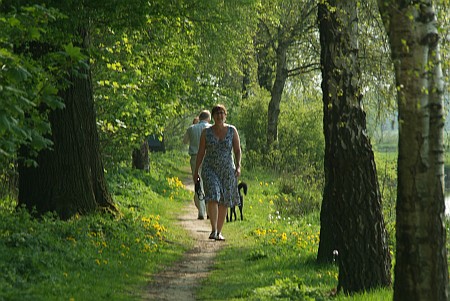