The area east of Dokkum is one of the most interesting parts of Friesland in terms of landscape and cultural history. The sea clay area is characterized by panoramic views, seemingly randomly situated mound villages, farms hidden behind old dikes and a number of natural and dug waterways.

Central to the area is the Dokkumer Grootdiep, the remains of a sea arm that reached as far as Dokkum and which for centuries offered the city a direct connection to the open sea. Initially, the largest sea vessels were able to reach Dokkum. But in the course of the centuries, the sea arm silted up further and further. Ultimately, only a strong meandering channel remained. In 1729 the sea arm at the current Dokkumer Nieuwe Zijlen was closed. A lock with three drainage channels was built in the dike. The complex is used to this day for the drainage of the Frisian basin water. In 1969, when the Lauwerszee was closed off, a separate lock was built just south of the old lock for shipping.

The Dokkumer Grootdiep is nowadays part of the standing mast route from the Frisian lakes to the Wadden Sea. For the sake of shipping, most bends were cut over the course of the centuries, but the original course of the sea arm is still largely present and, in part, also navigable. The dikes on either side of the sea arm are also largely intact. They are the silent and impressive witnesses of the past. Just outside Dokkum is the ’Schreiershoek’. Women and children used to cry here when their husbands and fathers went back to sea for a long time.

A little further north the Súd Ie runs, which ends at Ezumazijl in the Lauwersmeer. This water mainly has a function for the drainage of the area but is also perfect for a canoe trip. Driving along the road from Dokkum to Lauwersoog you can clearly see the cut corners of the originally strongly meandering river on both sides.

South of the Dokkumer Grootdiep is the Strobossertrekvaart. This canal was dug halfway through the seventeenth century by order of and at the expense of the city of Dokkum, which wanted a sailing connection with the city of Groningen. However, the costs turned out to be much higher than the revenues and the city threatened to go bankrupt. The ownership of the canal then came into the hands of a group of creditors. They had a number of toll booths built along the route to ensure a sufficient level of yield. Along the canal, there was a towpath on which horses could walk in order to pull along the barges. Along the current route there are still so-called ’rolling poles’ in various places, which led to the guiding line when cornering.

To improve drainage, the Nieuwe Zwemmer was dug between the Strobossertrekvaart canal and Dokkumer Grootdiep at the end of the nineteenth century. The Oude Zwemmer is just north of it.

With all that water, it is a beautiful sailing area, especially for the ’smaller’ water sports. But there are also many options for larger boats. And for the largest ships, the standing mast route runs straight through the beautiful area. from the Frisian lakes to the Wadden Sea. This very busy route leads through Dokkum, one of the eleven Frisian cities and the center of Northeast Friesland. You must have seen this beautifully preserved fortified town!

The area is also excellent for exploring ’on shore’. The many small and quiet roads are ideal for shorter and longer cycling trips. In addition, there are various walking routes through the area. 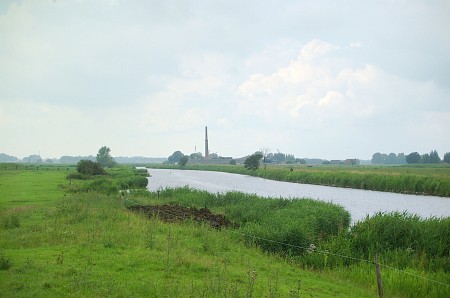