Drachten – definitely worth a visit!

In the middle of the Northern Holland, where the green fields end, starts the village called Drachten. Located between National Parks De Alde Feanen and Drents-Friese-Wold as well as Frisian lakes, Drachten is home for 45 000 people. Being the first city of the community Smallingerland, Drachten is part of the Frisian province.

Till the 17th century, Drachten never came up, as there were two areas: Noorderdracht and Zuiderdracht which were named after two small water courses. In 1641 the boom in Drachten began, as the Drachter Compagnons agreed on a contract in order to cut peat in the eastern part of the region. Around 800 people were working on this project and during this course of events the canal Compagnonsvaart developed. Furthermore, the number of workers rapidly exceeded the number of inhabitants of Drachten, as it started to be called. After the Second World War, the first industrial area has been established in Drachten. In 1950 Philips settled in Drachten, and though only 30 women started to work in a preliminary work space, the community enabled more and more halls and spaces to work. Thus, in the 70s there was one of the biggest Philips-establishments, as it provided work for 2500 people.


Being a village, Drachten seems to be rather a city, as it is well-known for its fun-shopping and dining facilities. Thus, one can say that a reason to visit Drachten can be fun-shopping, gastronomy and culture. The main street Zuiderbuurt not only combines cosiness and relaxation in its atmosphere but also provides a lot of possibilities to have delicious meals. If recreation and a peaceful time are desired, Drachten has a lot of beautiful and astonishing parks and forests which can be enjoyed.


Drachten has a lot of monuments to offer, whereas the most popular ones are Carillon and Standbeeld voor de Fierljepper at the Noorderhogeweg. Moreover, the element of water is very important in Drachten. For instance, Drachten is the birthplace for its Skutjes boats, hence it gives visitors the opportunity to relax and have a unique experience with friends or family. Additionally, it is really popular amongst locals and tourists, especially because of the annual competition Skûtsjesilen. Another famous attraction based on water is provided in De Welle, in forms of a subtropical swimming pool. Last but not least, De Naturij is a petting zoo including native and exotic animals, which attracts a lot of tourists and provides activities for children.

The cultural heritage of Drachten is represented by Museum Dr8888, where one can also find the art style of DADA by the famous Dutch artist Theo van Doesburg. The art style of DADA can especially be discovered and admired at the street Torenstraat, as there are a lot of colourful window-frames. Moreover, the theatre De Lawei is a cultural meeting point for comedy lovers, as famous comedians perform several times a year. Last but not least, the summer event Simmerdeis is a very popular attraction in Drachten, since it is an opportunity for new talents but also well-known Dutch artists to perform.

All in all, Drachten has surprisingly much to offer, as there are a lot of valuable, unique monuments and cultural attractions which still have an influence on the village. Thus, being a treasure of Friesland, Drachten has a lot of treasures itself.

If you are looking for a village, with cheerful and lively atmosphere: VISIT Drachten! 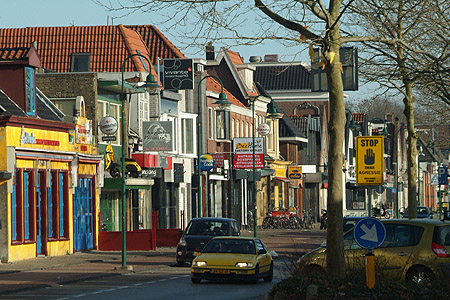